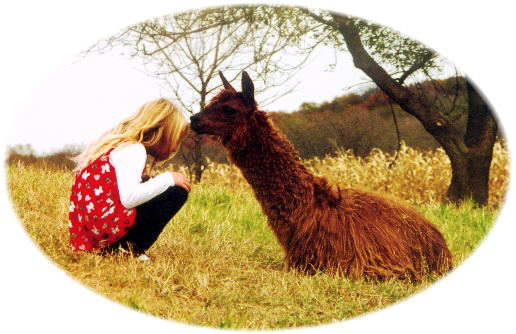 The Suri Alpaca... the rarest of the rare.The alpaca is a member of the camelid family which includes the llama and the wild vicuna and guanaco. They originate from the high Andes plateaus of Peru, Chile and Bolivia, and have been imported to the U.S. since 1984. The importation has since been closed.There are two breeds of alpacas, the suri and the huacaya. The suri alpaca fiber grows parallel to the body, hanging in long twisting locks, while the huacaya fiber is more of a wooly-like fiber.The fiber of the suri alpaca is compared to fine cashmere. It is stronger and warmer than sheep wool without the "itch factor" and has the luster of silk. Suri fiber is used for high fashion fabric for designer clothing, luxury apparel, coats, sweaters and specialty interior fabrics and textiles.There are approximately 12,000 registered suris in the U.S., representing only about 18% of the total U.S. alpaca population. The rarity of the suri breed only reinforces its ability to maintain it's intrinsic and monetary value.Suri alpacas are a great investment, not only because of their rarity, but also for the fact that they can be insured and depreciated, all farming expenses can be used as tax write-offs and as their popularity grows, so will it's value as a fiber animal. The number of alpaca breeders is growing steadily each year, which only reinforces the fact that these animals are here to stay!Fun Facts About Alpacas